China Reply to the European Union; Do not accept sanctions related to Uighur Muslims 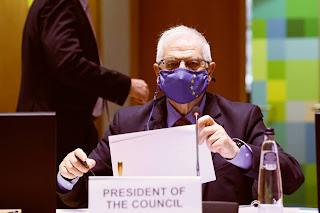 UMMATIMES - The Chinese government denies accusations they have committed human rights abuses against Uighur Muslims in Xinjiang. According to them, these accusations were baseless. In return, they imposed sanctions on the European Union, the first party to sanction the violations of human rights.
Quoted from Channel News Asia, sanctions from China target members of parliament, diplomats, institutes, and businesses from European Union member countries. The effect is, apart from not being able to visit China, they will also not be able to carry out economic transactions with entities in the country of the bamboo curtain.
"The German politician, Reinhard Butikofer, who heads the European Parliament's delegation on Chinese affairs, is one of the sanctions imposed. In addition, the non-profit Alliance of Democracies Foundation, formed by former Secretary General Nato Anders Fogh Rasmussen," said the Chinese Foreign Ministry in a statement. press release, Tuesday, March 23, 2021.
Countries in Europe do not accept these sanctions. Some of them are Germany, the Netherlands and Belgium. The Netherlands has even asked the Chinese Ambassador to The Hague to explain the sanctions.
Dutch politician, Sjoerd Sjoerdsma, said the strong reaction from China was a sign that they were sensitive to international pressure. This, he said, could be a motivation for countries that oppose the practice of human rights violations in Xinjiang not to be afraid to be firm and speak the truth.
"These sanctions are proof that China is easily depressed. Make this an encouragement for all my colleagues in Europe," said Sjoerdsma who is a member of parliament from the Netherlands and a supporter of sanctions against China.
As previously reported, America, the European Union, Canada and the UK jointly issued new sanctions for China. They sanctioned four officials and one Chinese entity based in Xinjiang. The reason is because they have gathered enough evidence about human rights violations against Uighur Muslims in Xinjiang.
According to his fourth statement, Uighur Muslims are being held in concentration camps. There, Uighur Muslims are tortured, forced to work and sterilized to prevent their numbers from growing.
China, as noted above, denies this. China has always adhered to the claim that Uighur Muslims attend vocational education in Xinjiang.
Despite China's response, US Secretary of State Antony Blinken praised the joint response. "This shows that the trans-Atlantic response provides a stronger signal to those who violate human rights," Blinken said regarding the issue of Uighur Muslims in Xinjiang.