China's move and response to the Coup in Myanmar 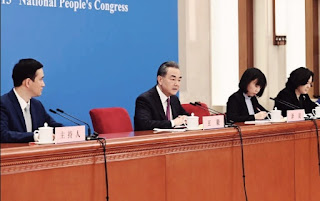 UMMATIMES - Chinese Foreign Minister Wang Yi said China would communicate with all sides to ensure a solution to the Myanmar coup. Wang Yi also promised that his country would not remain silent about the situation in Myanmar.
"China is willing to contact and communicate with all parties involved without violating their sovereignty. So, we will take a conservative role to defuse tensions there," said Wang Yi, week 7/3.

China tends to calm down in response to the Myanmar coup. China considers what happened there is an internal conflict. In fact, state-owned media in China called the Myanmar coup situation a "massive cabinet reshuffle".

Some think China wants to take advantage of Myanmar's situation. There are also those who consider China involved in the series of coups.
The Chinese government has denied all presumptions. The Myanmar coup was not something China wanted to see. Wang Yi said, China supported the UNSC statement on the release of political prisoners, including State Counselor Aung San Suu Kyi. Therefore, it is not true that their allegations are seeking profit from the Myanmar coup.
"China has long been friendly with all parties in Myanmar, including the National League for Democracy (NLD). Friendship between Myanmar and China always involves all sectors."
"Regardless of the situation in Myanmar, China's commitment to promoting China-Myanmar relations will not diminish. We still want to promote cooperation," said Wang Yi.