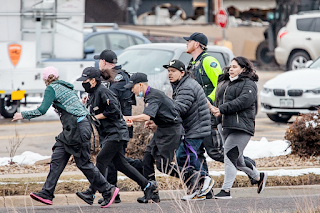 UMMATIMES - Another shooting action occurred in the United States. On Monday, March 22, 2021, a man opened fire on a supermarket in Boulder, Colorado, United States.
When the news was released, the shooting incident had killed 10 people, including a member of the police. The shooter has now been detained, but his identity has not been published.
This deadly shooting event was recorded for the second time in less than a week.
Colorado Police have not provided details about this shooting. The motive for the shooting has not been revealed.
The shooting occurred precisely on Monday, March 22, 2021 at around 3 pm at King Soopers supermarket in Boulder, northern Colorado region, United States. People who were shopping and employees of the King Soopers supermarket fled to safety when police surrounded the shooting scene, which is about 2 miles from the University of Colorado.
Michael Dougherty, Attorney for the Boulder region, said the regional government and related authorities will publish the results of the investigation. Dougherty promised the families of the shooting victims that he would do everything he could to uphold justice in this case.
An eye witness, Ryan Borowski, revealed that he still did not believe what had happened. Initially, Borowski went to the King Soopers supermarket to buy some ice cream. But he changed his mind at the last minute and walked down another aisle in the supermarket. There, he heard the popping of bullets and immediately ran to the back of the supermarket.
"Shooting, running ...," shouted several employees of the King Soopers supermarket.
This shooting incident occurred less than a week after the shooting in Atlanta on Tuesday last week, which killed eight people. Boulder Police Chief Maris Herold said 10 people had been killed in the attack on the King Soopers supermarket.
Among the victims who died was Eric Talley, 51, the police officer. Talley was the first officer to arrive at the scene.
Colorado Governor Jared Polis said the murder was ridiculous.
“Today we have seen the face of the devil. I am sorry for the people of Colorado, ”said the Governor of Polis.