Demo in Sydney; Social support for the people of Myanmar 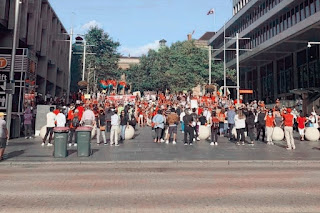 UMMATIMES - On Saturday, March 6, 2021, Hundreds of people gathered in the city of Sydney, Australia, to protest against the military coup in Myanmar. The protest action also urged the Australian Government to take a stand against the Junta (Myanmar military).

"We are here to do what we can to help our country, to show the people that we also suffer with them (the people of Myanmar) and we are on their side, we are fighting day by day," said demonstrator Sophia Sarkis.

The demonstration in the City of Sydney was coordinated by Thein Moe Win. He called on the Australian Government and other countries to take more concrete steps to ensure the Myanmar military coup failed.

In the action, demonstrators in the City of Sydney sang and displayed a three-finger symbol, as a form of their solidarity against injustice in Myanmar. The demonstrators also stated that what they were doing was a form of support for those who put themselves in danger in Myanmar.

"We will encourage the Australian Government to cooperate with the United States, Britain and member states of the European Union to take concrete action against Myanmar's military dictatorship," Win said.