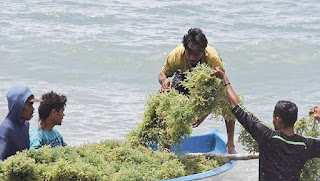 UMMATIMES - Thousands of Indonesian seaweed farmers won compensation for Australia's worst oil spill case with an estimated compensation of hundreds of millions of rupiah. This oil spill destroyed their seaweed harvest in 2009.
Sydney Federal Court upheld Daniel Aristabulus Sanda, who presided over a lawsuit on behalf of 15,000 seaweed farmers in West Timor, against PTTEP Exploration and Production Australasia, which operates on a Montana oil platform in the Timor Sea.
Australian Federal Court Judge David Yates said the oil spill caused material loss, death and damage to the seaweed that is the livelihood of the local community.
The judge ordered the farmers to pay Daniel around Rp. 253 million plus interest for the loss of his livelihood after his seaweed was damaged by the oil spill.
The judge also said he was waiting for a report to determine how many seaweed farmers were entitled to compensation and how many of the 15,000. Fishermen, Nusa Tenggara Timur grass farmers 'don't need' Australian assistance. Seaweed farmer lawsuit against Australian company
Millions of tons of seaweed invaded the Atlantic Ocean, what is the cause?
Ferdi Tanoni, from the West Timor Care Foundation who has been raising the case since 2009 said he immediately contacted Daniel - who is from Oenggaut, Rote Island - as soon as the results of the trial came out.
"You arrange it, I just accept it," said Ferdi, Friday (19/03).
He said that even if the company were to appeal, he remained confident "it would win too because the evidence (of the oil spill) was extraordinary." The explosion at the Montana oil platform caused a 23 million liter oil spill that lasted 74 days.
The oil platform is in Australian waters but the spill reaches the Timor Sea and the Indonesian coast. Of these 15,000 farmers, some of them testified in Federal Court. Daniel Sanda told the court last year that the oil spill destroyed all of his seaweed crops.
He first noticed yellow-gray bubbles in the waters around the harvest season in September 2009. Soon, all the seaweed turned white and died, he said at the time.
His livelihood has never fully recovered, although currently it is starting to grow again. About 30 other farmers gave the same testimony. The oil company admits that it was negligent and has stopped operations at the oil well but has always denied that the oil spill has reached Indonesian waters or caused such a large loss.
The company also said that if an oil spill reached the coast of Indonesia, it would split apart and would not poison the seaweed.
The company also said it had no obligation to pay attention to Daniel Sanda and other farmers.
But Judge Yates said in his ruling that PTTEP Australasia - the Australian branch of a Thai oil company - had responsibility for Daniel and other farmers.
He also said Daniel Sanda had suffered from years of income losses due to the oil spill and based on the judge's calculation, he was entitled to around IDR 253 million.
"I feel confident that the oil spill from the H1 well reached certain places in Indonesia, including the area where the claimant planted seaweed," said the judge.
"I feel confident that this oil spill caused or materially caused crop losses." Daniel Sanda said he was happy to win the lawsuit.
"I feel confident that although this is difficult to assess, despite the uncertainty, the claimant's losses can be calculated, and he is entitled to compensation.
In a statement posted on their website, PTTEP said they acknowledged the decision but expressed disappointment with the result.
"PTTEP emphasized that the ruling concerns (Daniel) Sanda's claims and that the claims of all members must be counted separately," said a company statement.
"The court ruling does not remove the requirement for individuals to show the losses and damages they suffered," the company added. PTTEP said they were considering filing an appeal.