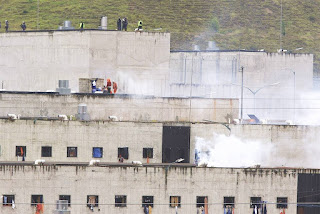 UMMATIMES - The simultaneous rioting in four prisons, which killed 79 people, prompted the Minister of Home Affairs (Mendagri) of Ecuador, Patricio Pazmino to decide to resign from his post. Pazmino's resignation letter was handed over to the President of Ecuador.
The number of prisoners who died as a result of the simultaneous rioting in four Ecuadorian prisons continued to grow to 79 on Wednesday (24/2). The four prisons are the prison in the western port city of Guayaquil, Cuenca Selatan prison, Latacunga city prison, Turi prison in Cuenca.
As a result of the rioting that occurred, several other detainees were injured, as were a number of police officials. Prison authorities said the incident occurred because of a "fierce battle" between organized gangs called Los Pipos, Los Lobos and Tigrones. They rely on drug trafficking and run their criminal businesses from inside the prison.
Since the unrest escalated, Ecuadorian President Lenin Moreno ordered the Ministry of Defense to exercise tight control over weapons, ammunition and explosives in the country's prisons.
"It is my own personal decision to submit my irrevocable resignation as minister," said Patricio Pazmino in a letter to President Lenin Moreno. Pazmino said the reason he resigned was due to health reasons, saying he had been diagnosed a second time with COVID-19.
He said this added to complications of a serious illness that he did not mention, but which he said put him "at enormous risk and unlikely to continue in office."