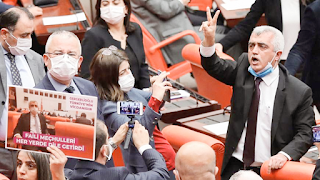 UMMATIMES - The Turkish president, Recep Tayyip Erdogan, has been accused of trying to ensure victory in the upcoming general elections (elections) by trying to ban pro-Kurdish political parties.
The former leader of the People's Democratic Party (HDP), Selahattin Demirtas, made the allegations from prison on Sunday (21/3) local time. The HDP is the third largest party in the Turkish parliament.
For years, the HDP has been under pressure for alleged links to Kurdish militants who waged a deadly insurgency since 1984. Dozens of MPs and HDP leaders have been arrested and thrown in jail on terror charges and other charges, which they have denied. Human rights groups (HAM) view the arrests as based on political motives.
Demirtas himself had twice challenged Erdogan in the Turkish presidential election. He has been in prison since 2016 despite calls from the European Court of Human Rights for his release.
HDP now faces the risk of being disbanded after Turkish prosecutors accused the party of being linked to Kurdish militants in a lawsuit before the Constitutional Court on Wednesday.
"The main reason they are trying to dissolve the HDP is to let the People's Alliance win the coming elections," Demirtas said in a written statement to AFP. Turkey's next elections are scheduled to be held in 2023.
Demirtas was referring to the electoral alliance between the AKP Party that houses Erdogan and his junior partner, MHP, who are ultra-nationalist. The alliance is known to have started losing support in recent opinion polls.
"This reason alone is sufficient to make the case (against HDP) illegal and illegitimate," said Demirtas, who is being held in a prison in Edirne, northwestern Turkey. "I hope the International Court of Justice will not grant irrational behavior and will reject this case," he added.
Furthermore, Demirtas said that the effort to disband the HDP was a symbol of the 'immature democracy and repressive mentality' that exists in Turkey.
Turkey's efforts to dissolve the HDP have drawn criticism from Western countries, which are also allies of Turkey. The United States said the effort would "further undermine" democracy, while the European Union warned that the move "would violate the rights of millions of voters".
Turkey has previously disbanded other pro-Kurdish parties over allegations linked to the militant Kurdistan Workers' Party (PKK) whose insurgency claimed thousands of lives. The PKK is considered a terror group by the Turkish government and its Western allies.
Indictments filed with the Constitutional Court accuse HDP of having "organic" links to the militants.
The indictments filed last week accuse the HDP of posing a threat to "the inseparable integrity of the state" and seeking to bar the party's 687 members, including Demirtas, from engaging in politics for five years.
The ban appears to be intended to ensure HDP members cannot form new parties under any other name, once the HDP is dissolved. Demirtas himself could face 142 years in prison if found guilty in connection with the PKK and on other charges.