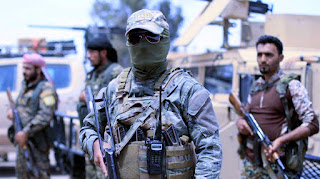 UMMATIMES - The Turkish air force carried out its first offensive in 17 months in northern Syria, a zone controlled by Kurdish militias, on Saturday evening local time.
"A Turkish fighter jet hit the Syrian Democratic Forces (SDF) military zone in the village of Saida, Ain Issa causing a loud explosion," the Syrian Observatory for Human Rights (SOHR) said.
This is the first air strike since the 'Operation Peace Spring', a military campaign launched by Turkey and its allies against the SDF in northern Syria in October 2019. The operation was interrupted after two deals negotiated by Turkey and the United States, and Moscow, which allowed Turkey to to take control of the 'safe zone' inside Syria which is about 120 kilometers long and 32 kilometers deep.
Today, Ain Issa Village remains under the control of the Kurdish forces.
According to the SOHR, the airstrikes occurred on the same day as "violent clashes" and "intensive rocket fire" on the front line of the Ain Issa district between SDF forces and a Turkish-backed faction. It was confirmed that there were a number of victims who had fallen as a result of the incident.
"The clashes between the two sides have been going on for the past 24 hours. Turkish forces have had difficulty advancing since the SDF destroyed a Turkish tank," said SOHR director Rami Abdul Rahman.
The Kurdish militia group, the Kurdish People's Protection Units, which is an important component of the SDF, is considered by Turkey to be a 'terrorist branch' of the outlawed Kurdistan Workers' Party.
But they have also been a major ally of the United States and others in the battle against the Islamic State group (ISIS) in Syria.