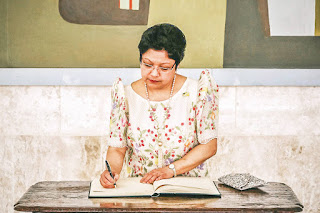 UMMATIMES - President Rodrigo Duterte fired a Philippine ambassador to Brazil, Marichu Mauro after his face was seen in a videotape of the physical abuse of a staff member of his household.
Duterte said he had approved a recommendation to remove Mauro on Monday. His decision also includes revoking pension benefits and removing Mauro's name from public office for life. Mauro was recalled home to the Philippines from Brazil in October.
The summons followed the circulation of video footage from security cameras at the residence of the Philippine ambassador in Brasilia. The State Department said by then the unidentified victim had returned to the Philippines and was trying to contact him in the middle of an investigation.
So far Mauro has not publicly commented on allegations of physical violence against a domestic assistant.