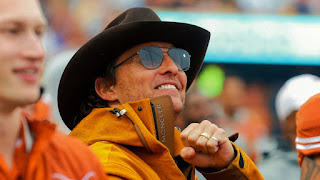 UMMATIMES - Hollywood actor Matthew McConaughey is considering running for governorship of Texas. revealed on an episode of the podcast "The Balanced Voice" in Houston.
"I'm considering that again, what is my leadership role?" he said when asked Mankarious if he would run in the Texas gubernatorial race.
"Because I think I have some things to teach and share, and what is my role? What is my category in the next chapter of my life that I will be in?" said the 51-year-old actor.
McConaughey was asked the same question on "The Hugh Hewitt Show" in November and said, "I don't know. I mean, it wasn't me. It would be people's desire rather than mine." "Look, politics seems to me to be a messy affair right now. And when politics redefines its objectives, I can be a lot more interested," McConaughey said.
While Texas Governor Greg Abbott is rumored to be running again in the gubernatorial election next year.
Last week, Texas became the largest state to lift Covid-19 restrictions by ending mandatory masks and allowing all businesses to operate at full capacity.
The top health official in Texas said that Governor Greg Abbott, a Republican, made the decision without consulting him, the Huffington Post reported.
Other Texas leaders have also come under fire recently after Texas Senator Ted Cruz, who is also a Republican, vacationed with his family to the coast of Cancun, Mexico, amid the extreme cold weather crisis sweeping the state.
Netizens on Twitter expressed mixed reactions to McConaughey's possible candidacy, such as asking what his political views were, what party he would join, as well as the pros and cons of the "True Detective" star.
McConaughey's political convictions are unclear because he has not clearly defined party affiliations. In December 2020, he accused left liberals of being too arrogant and condescending, and said the country had to become aggressive centrists.