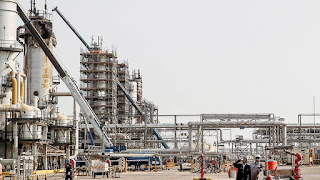 UMMATIMES - The drone attack ignited a fire at a Saudi Arabian oil refinery. The drone attack in Riyadh was claimed by the Houthi rebel group in Yemen.
The attack on Friday (19/3) at dawn local time was the second major attack this month launched by the Houthis against Saudi energy installations.
"The Riyadh oil refinery was attacked by drones, resulting in a fire which was successfully controlled," the Saudi Energy Ministry said.
It said no casualties were reported and oil supplies were not disrupted as a result of the incident.
The Saudi ministry strongly condemned the "cowardly attack". It said the drone strike was not only an attack on the kingdom but also the world economy and global energy security.
In a statement, the Houthi rebels claimed to have targeted energy giant Aramco in Riyadh with six drones in response to "brutal aggression" from the Saudi-backed military coalition in Yemen.
Houthi rebels have continued to step up cross-border attacks in the kingdom, despite a renewed push by United States President Joe Biden's administration to revive stalled peace talks.
The United States condemned the attack as an attempt "to disrupt energy supplies by targeting Saudi infrastructure".
"This behavior shows a lack of concern for the safety of civilians, whether working or living near the site," deputy spokeswoman for the US State Department, Jalina Porter told reporters.
He said the US government was "very concerned about the frequency of attacks on Saudi Arabia"
The latest moaning comes after Saudi Arabia earlier this month said it had thwarted missile and drone attacks on Ras Tanura - one of the world's largest oil ports - and Aramco facilities in the kingdom's eastern city of Dhahran.