Imran Khan; Positive Covid-19 After Vaccination, Asks Its Citizens to Continue to Vaccinate 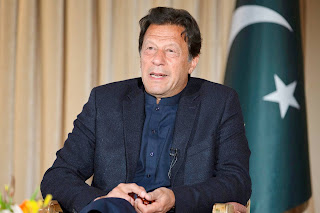 UMMATIMES - Pakistani Prime Minister Imran Khan tested positive for Covid-19 two days after receiving the first dose of the coronavirus vaccine, government officials said on Saturday.
First Lady Bushra Bibi also tested positive hours after confirming PM Khan's health condition. But Prime Minister Imran Khan appealed to his citizens but want to be vaccinated.
Pakistan's vaccination program is shrouded in doubt and Imran Khan's positive test could raise doubts about the vaccine and hinder the inoculation of its 220 million population, health experts say.
Health Minister Faisal Sultan said PM Khan was in good health with a mild cough and fever and was currently isolating himself at home.
Prime Minister Imran Khan is reportedly self-isolating at the Banigala residence, according to The News Pakistan. The 68-year-old prime minister may have been infected long before he got his first shot of the vaccine on Thursday, said Faisal Sultan.
"Prime Minister Imran Khan was not fully vaccinated when he contracted the virus. He just got the first dose and only 2 days ago, which is too early for the vaccine to be effective. Antibodies develop 2-3 weeks after the second dose of the 2-dose COVID vaccine," Faisal Sultan said on Twitter to validate the hoaxes and speculation spreading about the vaccine's efficacy.
Faisal Sultan also told local television that people should not associate the prime minister's coronavirus infection with a vaccine, which takes time to build up antibodies.
The head of the neighboring state, Indian Prime Minister Narendra Modi, wished Imran Khan a speedy recovery on Twitter.
While it is not clear which Covid-19 vaccine Imran Khan was given, the vaccine produced by the China National Pharmaceutical Group (Sinopharm) is the only one currently available in Pakistan.
Khan admits that he worries that his positive test could prevent people from being vaccinated, his adviser Shahbaz Gill told local television.
He said Khan, who is seen attending regular meetings and often without wearing a mask, is experiencing mild symptoms.
Asad Umar, the minister in charge of Pakistan's Covid-19 response operations, said on Twitter he was confident that Imran Khan had been infected prior to vaccination.
"So please do vaccination," said Umar.