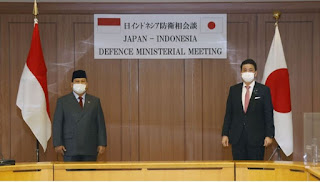 UMMATIMES - Defense Minister Prabowo Subianto met with Japanese Defense Minister Nobuo Kishi in Tokyo on Sunday. During the meeting, the two officials criticized China's activities in the waters of the North Natuna Sea which could increase tensions in the region.
Kishi said the two countries would urge China to refrain from unilaterally changing the status quo in the North Natuna Sea or the South and East China Seas.
Kishi said Indonesia and Japan agreed to increase defense cooperation and hold joint exercises with Japanese and Indonesian troops in the South China Sea.
They are pursuing this plan to raise concerns over the implementation of a Chinese law that allows its coast guards to fire on ships that intrude in the waters it claims.
Apart from that, the two ministers also talked about the political situation in Myanmar. Kishi said he and Prabowo agreed to work together to help restore Myanmar to a democratic government.
Following this meeting, the Indonesian and Japanese Ministers of Defense and Foreign Ministers will hold joint talks on Tuesday in Tokyo. The so-called 2 + 2 talks will be the second since December 2015.