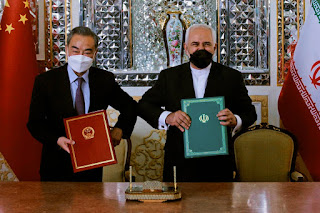 UMMATIMES - China and Iran signed a 25-year cooperation agreement on Saturday to strengthen their economic and political alliance. They took this agreement amid the sanctions that the United States gave to the two countries.
"The relationship between the two countries has now reached the level of a strategic partnership and China seeks to enhance a comprehensive relationship with Iran," said Chinese Foreign Minister Wang Yi.
According to Wang, China's relations with Iran will not be affected by the current situation in which the United States is confronting but will be permanent and strategic. "Iran independently cuts off its relations with other countries and unlike some countries which change their position with one phone call," he said.
The deal brings Iran into the Chinese Belt and Road Initiative, a multi-trillion dollar infrastructure scheme intended to stretch from East Asia to Europe.
The project aims to significantly expand China's economic and political influence and has raised concerns in the United States.
China has spoken frequently against US sanctions on Iran and partly against them. Iranian Foreign Minister Mohammad Javad Zarif called China a "friend for difficult times".
Wang met Iranian President Hassan Rouhani ahead of the signing in Tehran. The agreement is expected to cover Chinese investment in sectors such as energy and infrastructure.
Rouhani also appreciated China's support for Iran's position on the 2015 nuclear deal. In this agreement, Iran agreed to limit its nuclear program in exchange for the lifting of international sanctions. "Cooperation between the two countries is very important for the implementation of the nuclear agreement and fulfilling the obligations of European countries," he said.
United States President Joe Biden is seeking to revive talks with Iran about a nuclear deal abandoned in 2018 by his predecessor, Donald Trump. Iran wants Trump's sanctions removed before negotiations resume.
"Under the new government, America wants to reconsider their policies and return to the nuclear agreement, and China welcomes their move," said Wang.
With this agreement, China has also promised to deliver more coronavirus vaccines to Iran, the Middle Eastern country hardest hit by the pandemic.