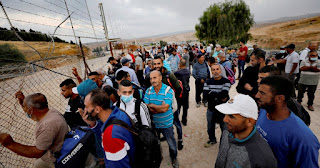 UMMATIMES - Israeli authorities postponed plans to vaccinate Palestinians working in the Jewish state and West Bank settlements. This postponement was announced on Friday (5/3) until further notice.

COGAT, the Israeli military body that coordinates day-to-day affairs with the Palestinian Authority, attributed the postponement to an "administrative delay". COGAT said that a new starting date for the vaccination campaign would be determined later.

The Palestinian worker vaccination program is supposed to start on Sunday (7/3) at the West Bank crossing to Israel and in Israeli industrial zones.