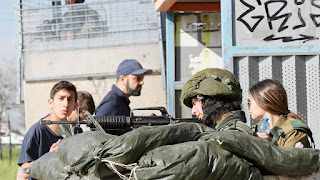 UMMATIMES - A Palestinian was shot dead by Israeli soldiers when clashes erupted during demonstrations in the Israeli-occupied West Bank.
"A citizen who was shot in the head with a live bullet, was killed," the Palestinian Health Ministry said as reported by AFP news agency on Saturday (20/3/2021), adding that the incident took place in the village of Beit Dajan, near Nablus on Friday (19 / 3) local time.
The Israeli military acknowledged "violent rioting" at the site, "during which dozens of Palestinians threw stones at IDF (Israeli military) forces."
"IDF forces responded by means of rioting and by firing into the air," said a statement from the Israeli military.
"We are aware of reports of Palestinian casualties. The cause of the injuries is still unknown," the Israeli military said. "The incident is currently being investigated," he added.
The Mayor of Beit Dajan, Abdelrahman Hanani, said that a Palestinian man named Atef Yussef Hanaysheh (42) was killed in clashes between Israeli soldiers and Palestinians who opposed Israeli settlement activities.
Palestinians gathered on Friday (19/3) in the West Bank to protest against the expansion of Israeli settlements, which are considered illegal under international law.
It is known that about 475,000 Israeli settlers live in the West Bank, a region with more than 2.8 million Palestinians.