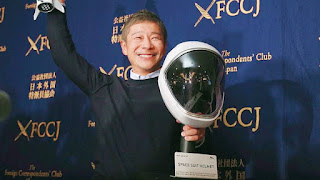 UMMATIMES - Yusaku Maezawa, a billionaire uploaded a video contest to the moon, through his Twitter account. "I invite you to join me in this mission. Eight of you from all over the world," said Maezawa, Wednesday, March 3, 2021. "I have bought all the seats, so this will be a private ride," said Maezawa.
If successful, the 45-year-old Japanese online fashion tycoon and his guests will be the first lunar explorers since the last Apollo mission in 1972. The plan for this trip will use Elon Musk's SpaceX's Starship. There are two criteria that must be met if you want to join:
1. Ready to work hard creatively
2. Help other crew members do the same.
About 10 to 12 people are expected to take part in this expedition, which is expected to circle the moon before returning to Earth. The mission is named dearMoon and is scheduled to depart by 2023. Applicants must pre-register by March 14 with a final interview and medical check-up scheduled for the end of May. Two prototypes of the Starship rocket had crashed on landing in recent months. However, SpaceX founder Elon Musk said in a Twitter video that he believes the spacecraft reaches orbital levels before 2023 and is safe for human flight by 2023.