Joe Biden; China will not be able to surpass the US to become the strongest country 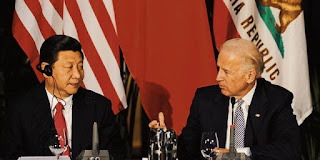 UMMATIMES - The President of the United States (US), Joe Biden, stressed that he would prevent China from surpassing the US to become the most powerful country in the world. Biden also compared President Xi Jinping to Russian President Vladimir Putin, who he said embraced the autocracy.
As reported by Reuters on Friday (26/3/2021), Biden promised to invest heavily to ensure the US wins in the fierce competition between the two countries with the largest economies in the world.
Biden said he spent "hours" with Xi while still serving as US Vice President under President Barack Obama. Biden believes Xi believes autocracy - not democracy - holds the key to the future.
Biden said he had made it clear to Xi that the US was not seeking confrontation, but insisted on asking China to comply with international rules for fair competition, fair trade and respect for human rights.
"China has an overall goal ... to become the foremost country in the world, the richest country in the world and the most powerful country in the world. That will not happen in my eyes because the United States will continue to grow," Biden told reporters at the White House. .
Amid deteriorating relations between the US and China, Biden likens Xi to Putin by calling them both supporters of the autocracy.
"He is one of those people, like Putin, who thinks that autocracy is the wave of the future, (and) democracy cannot function in a world that is too complex," Biden said of Xi.
"He doesn't have a democratic framework - with a small 'd' - in his body, but he's a smart, smart person," he added, still referring to Xi.
Furthermore, Biden said he would work with US allies to hold China accountable for its actions in Taiwan, Hong Kong, the South China Sea and for its treatment of the Uighur Muslim ethnic minority in Xinjiang, while encouraging China to adhere to international rules for fair trade. .
Biden revealed that he confirmed the US position to Xi in a telephone conversation during the two hours after he took office in January.
"As long as you and your country continue to violently violate human rights, we will endlessly call on it to attract the world's attention, and clarify, make clear, what is happening. And he understands that," he said.
Not only that, Biden also stated that he would ensure an increase in US investment in promising new technologies, such as quantum computing, artificial intelligence and biotechnology.
He wants to return US investment in technology research and development, up to close to 2 percent of the Gross Domestic Product (GDP) invested in the 1980s from the current figure of about 0.7 percent.
"The future lies in who can, in fact, have a future related to technology, quantum computing, various things including in the medical field," said Biden.
"We will make real investments," he stressed, stressing that China's spending on infrastructure is three times that of the US.
Responding to Biden's remarks, China's Ambassador to the US, Cui Tiankai, in an interview with CNN's senior journalist, Chritiane Amanpour, emphasized that China's goal is to "fulfill the aspirations of the developing Chinese people for a better life".
"Our goal is not to compete or replace other countries. This has never been our national strategy," said Cui.