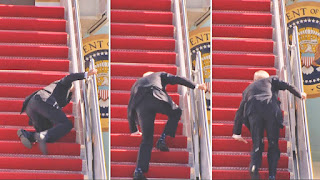 UMMATIMES - President of the United States Joe Biden experienced a small incident while boarding the presidential plane, Air Force One on Friday (19/3) local time. Biden lost his footing and stumbled several times as he climbed the steps to Air Force One.
The 78-year-old leader of the United States was initially climbing the steps smoothly about halfway to the presidential plane, when he suddenly stumbled.
Biden holding onto the ledge with his right hand, he tried to get up quickly but stumbled again. He got up again but stumbled again, this time falling to his knees.
Biden then stood up, paused for a moment and rubbed his left foot before he reached the top of the stairs. After that he turned around and saluted, then got into the plane.
Air Force One takes off shortly afterward from outside the capital Washington for a flight to Atlanta, where Biden will meet members of the Asian-American community who are shocked by the brutal shooting at a massage parlor.
Biden was not injured in the incident. "He's fine. He's fine," Deputy Press Secretary Karine Jean-Pierre told reporters about the Biden tripping incident.
"At that time the wind was very strong. I almost tripped myself. He (Biden) was one hundred percent healthy and fine," said Karine.
The incident was caught on camera and widely spread on social media. Netizens are busy commenting on the incident, some even questioning Biden's physical abilities.
Biden is the oldest president ever to serve in the United States. Last year he was often seen running up the stairs to the stage or towards the podium.