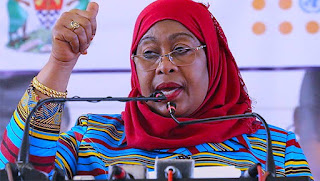 UMMATIMES - Vice President of the United States (US) Kamala Harris congratulated the new president of Tanzania, Samia Suluhu Hassan on Saturday (20/3). Hassan became the first woman in Tanzania to hold an important position in the country.
Harris, who became the first woman and first black person to serve as US vice president, said the US was ready to strengthen ties between the two countries.
"I send my congratulations to @SuluhuSamia after he is installed as the new President of Tanzania - the first woman to hold the post. The United States is ready to work with you to strengthen relations between our countries," he wrote.
Hassan, who served as vice president since 2015, urged countries to unite and avoid accusing each other after the death of John Magufuli, his predecessor who was skeptical of the COVID-19 pandemic.
As a former office employee, Hassan's political career began in 2000 in his native Zanzibar, a semi-autonomous island nation, before being elected to the national assembly in Tanzania and assigned as senior minister.
As a supporter of the ruling party, the 61-year-old woman's career continued to streak until she was chosen by Magufuli as her running mate in her first presidential election campaign in 2015. Her party, Chama Cha Mapinduzi (CCM) won a landslide victory and brought her name in history as a female vice president. first in Tanzania.
The pair were re-elected last October in disputed elections, which opposition and independent observers say was tainted by irregularities.
Hassan sometimes represents Magufuli on overseas trips, but his name is rarely heard outside of Tanzania. She became known when she appeared on national television wearing a black headscarf to announce Magufuli's death due to her illness.
In his meek address - a stark contrast to the fiery rhetoric favored by his predecessor - Hassan declared 14 days of national mourning.