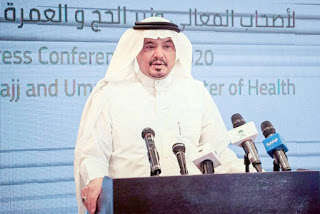 UMMATIMES - Saudi Arabia's Minister of Haj and Umrah Mohamed Benten was fired by King Salman bin Abdulaziz al-Saud. The removal was announced through a royal decree as quoted by the Saudi Press Agency on Friday, March 12, 2012. "Mohammed Saleh bin Taher Benten, Minister of Haj and Umrah will be removed from his post," as quoted from the SPA Twitter account.
As a replacement, King Salman appointed Minister of State Issam bin Saeed in charge. Benten has been the Minister of Haj since 2016. Hajj and Umrah have brought in billions of dollars every year which was an important source of income for Saudi Arabia before the Covid-19 pandemic. However, to prevent the spread of Covid-19, the Kingdom of Saudi Arabia has decided to drastically reduce the number of pilgrims who can perform Hajj.
Companies engaged in supporting Hajj have also been affected by the tightening. Before the pandemic, 1,300 hotels and hundreds of shops were always packed with congregants. King Salman approved assistance to companies and the people of Saudi Arabia engaged in organizing Hajj.
Recently, Jabal Omar Development Company, one of the largest property companies in Saudi Arabia, received a loan of 1.6 million Riyal from a bank after being hit hard by the pandemic.