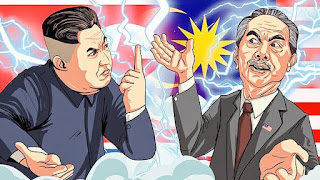 UMMATIMES - The Malaysian government regrets the attitude of North Korea in cutting off diplomatic relations. They also asked all North Korean diplomatic staff to leave Malaysia within the next 48 hours.
The Malaysian Foreign Ministry accused North Korea of ​​not respecting good relations among the international community. "Malaysia condemns the decision which is deemed inappropriate and unconstructive," he said in a statement quoted from Malaysia Kini, Friday, March 19, 2021.
North Korea is upset that a Malaysian court allowed a citizen to be extradited to the United States to face charges of money laundering. "With regard to the urgent situation that has occurred, the Ministry of Foreign Affairs hereby announces a complete termination of diplomatic relations with Malaysia," the government was quoted as saying by KCNA.
The North Korean government considers the Malaysian government to have made an unforgivable mistake. "Because forcibly sending innocent citizens (North Korea) to the United States," he said.
The North Korean side considers Malaysia to have acted hostile to it and bowing to US pressure. They warned that the US would get a reply for this.
This official statement by the North Korean government claims an unnamed citizen of the country is involved in legal external trade in Singapore. They denied that their citizens were involved in money laundering.
Malaysia was one of the few countries with which North Korea had ties until the relative of North Korean leader Kim Jong Un, Kim Jong Nam, was murdered by a banned nerve agent as he waited to catch a flight from Kuala Lumpur. This incident had made relations between the two countries deteriorate.
The relationship between the two improved after Malaysia announced the reopening of its embassy in Pyongyang. But the North Korean government's statement today ended relations between the two countries.