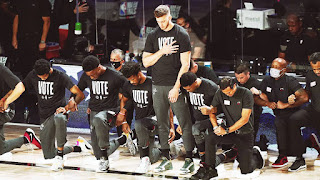 UMMATIMES - The Miami Heat and the NBA are reviewing a video of Meyers Leonard using anti-Semitic slurs while playing a video game on Monday. The insult started when Meyers Leonard played the game "Call of Duty" and live streaming with other players on Twitch.
An NBA spokesperson issued a statement on Wednesday, “We have just become aware of the video and are in the process of gathering more information. The NBA strongly condemns any form of speech that encourages hate speech. "
Heat's owner, Mickey Arison, and his son, Nick, who is Heat's CEO, are Jewish. “We were both surprised and disappointed to see @MeyersLeonard using offensive and ugly #antisemitic slurs. We have reached out to @MiamiHEAT and @NBA about this and urge Mr. Leonard to issue an immediate apology for this gruesome and hateful rhetoric, ”The Anti-Defamation League posted on Twitter.

"I deeply regret using anti-Semitic slurs during yesterday's live stream," wrote Meyers Leonard. "Although I didn't know what the word meant at the time, my ignorance of its history and how offensive it was to the Jewish community was no excuse and I was wrong.
"I am now more aware of its meaning and I am committed to finding people who can help educate me about this type of hatred and how we can fight it."
Origin PC which was a partner with Leonard in May, On Tuesday released a statement which said, “A comment recently made by Meyers Leonard that does not reflect the values ​​or views of Origin PC. We have decided to terminate our working relationship with Meyers on 3/9/2021."
Leonard is out for the rest of the season after undergoing shoulder surgery in February. He played only three games in 2020-21. He signed a two-year, $ 19.5 million contract with Miami before the season on a bail of $ 9.4 million. The Heat have the option to take the deal last year.