Mosque in Strasbourg, sparked a debate from Ministry of Internal Affairs 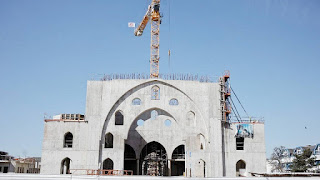 UMMATIMES - The plan to build a mosque in the Strasbourg region of France has sparked debate from a number of parties regarding the source of the so-called state money. While Strasbourg authorities approved the use of public funds for the construction of the mosque, the French Interior Ministry raised objections.
Strasbourg city authorities, led by Mayor Jeanne Barseghian of the Green Party, granted a grant of 2.5 million euros for the Milli Gorus Islamic Confederation (CMIG), a pan-European movement for the Turkish diaspora on Monday (22/3) local time.
In response to this, the French Interior Ministry stated that the Strasbourg authorities used state funds to fund 'foreign interference' in French territory. It is known that the plan to build a mosque in Strasbourg was supported by a leading Turkish Muslim group.
"We believe that this association can no longer be a representative of Islam in France," said the French Interior Minister, Gerald Darmanin, referring to CMIG.
"We believe that the city authorities should not fund foreign interference on our land," Darmanin told BFM television.
It is known that CMIG is one of three Muslim confederations in France that refused to sign the anti-extremism charter championed by President Emmanuel Macron. It is known that Macron wants to crack down on Islamic extremism in France, which is believed to be behind a series of terror attacks in the country since 2015.
Macron wants these groups to commit in writing to rejecting 'political Islam' and respecting the rule of law in France, as he seeks to fight radicals he sees as a threat to France's long-standing secular system.
The French government has also drafted a bill that would force Muslim groups to declare hefty foreign funding and would give more powers to the state to stop speech deemed hateful or violent.
In a separate interview on Tuesday (23/2) local time, Macron warned Turkey not to interfere in the French presidential election (pilpres) next year. Relations between France and Turkey are marked by strife over various conflicts, from Libya, Syria to Nagorno-Karabakh, as well as Turkish accusations of Islamophobia in France.
In his statement, Darmanin said he had asked local government representatives to file a complaint with the court to stop the grant.
As Mayor of Strasbourg, Barseghian, said that the mosque building project had been planned since 2017, before he was elected, and that funding was given if Milli Gorus was able to provide a solid financial plan and convey 'reaffirmation of the values ​​of the Republic (France)'.
One of the CMIG officials, Eyup Sahin, of his group refused to sign the anti-extremism charter because he was not allowed to be fully involved in its drafting.
"It was drawn up by two or three people. If we sign a charter, it is a charter that we compile together," said Sahin.
Meanwhile, Darmanin is scheduled to meet with the President of the Muslim Council of France (CFCM), the umbrella group for Muslim organizations, in the next few days in an effort to reach an agreement.