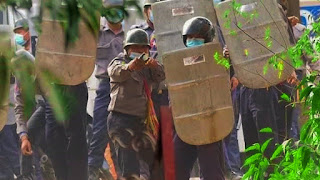 UMMATIMES - Myanmar's military has killed around 70 people since the coup began. The majority of the victims were young people under 25 years of age. The Myanmar Military Junta has also arrested thousands of people. The latest tally, there are 2000 people who have been arrested arbitrarily or illegally during the Myanmar coup taking place. According to UN investigator Thomas Andrew.
"Myanmar is currently controlled by a sadistic and illegal regime," Andrews said.
Andrew has a lot of evidence about the killings and arrests carried out by the Myanmar Military. ranging from videos of the Myanmar military apparatus beating demonstrators and medics to videos of the Myanmar military shooting citizens into their homes.
Andrew urged UN member states to impose multilateral sanctions on the Myanmar Military. sanctions targeting businesses controlled by the military, for example the Myanmar Oil and Gas Company, whose revenues are estimated at US $ 1 billion per year.
"Our forces have refrained from confronting the demonstrators," said the Myanmar military.
Myanmar's military claims they have no choice but to rigorously discipline citizens. The Myanmar military considered the actions carried out during the Myanmar Coup as an effort to maintain order and order.