Myanmar military; Shoot the Citizens at the Cemetery 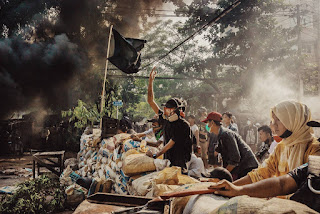 UMMATIMES - The Myanmar military opened fire on civilians attending the funeral on Sunday. An eyewitness said the mourners were running to avoid the attack.
The mourners were actually attending the funeral for a 20-year-old student in Bago near the commercial capital Yangon. There are no reports of casualties in this incident.
"While we were singing the revolutionary song for him, the security forces just came and shot us. People, including us, ran away when they opened fire," said a woman named Aye.
Elsewhere, 12 people were killed by the military. The Aid Association for Political Prisoners on Sunday, took the total number of civilians killed since the February 1 coup to 459.
Meanwhile, thousands of villagers in the border area fled to Thailand after a military air raid on one of the ethnic militias has intensified attacks since the coup.
At least six children aged between 10 and 16 were among those killed on Saturday, according to news reports and eye witnesses. The protesters referred to the victims as "Shooting Stars".