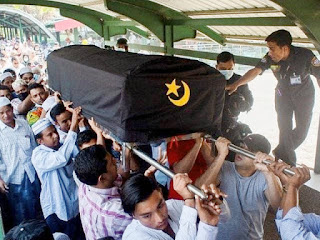 UMMATIMES - An official (Khin Maung Latt) from the National League for Democracy (NLD) party founded by Myanmar's de-facto leader, Aung San Suu Kyi, died in custody. The death of Khin Maung Latt, 58, in police custody was disclosed by colleagues from the NLD. According to other officials from the NLD, they suspect the 58-year-old man was tortured after being detained by police who cracked down on Myanmar military anti-junta protesters.
Khin Maung Latt is the head of the local NLD in the Yangon region - the largest city in Myanmar. Khin Maung Latt was arrested when Myanmar police cracked down on anti-junta military demonstrators on Saturday (6/3) night, after 21:00 local time. He was detained at a police station in Pabedan district, Yangon.
According to Khin San Myint (his deputy), photos from the hospital showed him having wounds on the back of his head and bruises on his back. "Doctors said it was not the cause of death," "They said it was a heart condition," said Khin San Myint.
Ba Myo Thein, a member of parliament from the NLD, said reports of bruises to Khin Maung Latt's head and body sparked suspicions that she was being persecuted. "It looks like he was arrested at night and tortured cruelly." "This is completely unacceptable," he said.