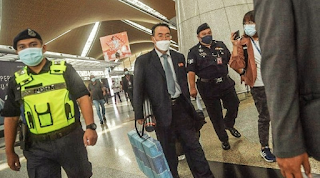 UMMATIMES - North Korean diplomats in Malaysia have closed their embassy and returned to their homeland, after North Korea cut diplomatic ties because a Malaysian court allowed the extradition of its citizens to the United States.
The severance of diplomatic ties announced by Pyongyang on Friday, labeled the extradition of its citizens by Malaysia an "unforgivable act subject to American pressure".
In early March a Malaysian court ruled that a North Korean national, Mun Chol-myong, could be extradited to the US to face money laundering charges for allegedly exporting prohibited goods to North Korea in violation of international sanctions.
After Pyongyang announced it was cutting diplomatic ties, Malaysia gave North Korean diplomats 48 hours to leave the country.
On Sunday the North Korean flag and a plaque were taken down from the North Korean Embassy, ​​a mansion in upscale Kuala Lumpur, and its gates were chained, according to a Malay Mail report, March 21, 2021.
Before leaving, North Korea's Chargé d'affaires, Kim Yu-song, accused Malaysia of siding with Washington in a "conspiracy" against Pyongyang, and of carrying out "profound hostility".
Kim, North Korea's most senior diplomat in Malaysia, and a group of other North Korean diplomats and their family members then departed by bus.
The group arrived at Kuala Lumpur airport, loaded a pile of suitcases onto the trolley and went to check-in at the counters used by regular passengers.
The 33 people, including diplomats and their family members, left the embassy by bus at around 11 a.m. and left for Shanghai on a plane that took off at 4:56 p.m., South Korean news agency Yonhap reported.
North Korea and Malaysia have had bilateral diplomatic relations since 1973, but relations were strained when North Korean leader Kim Jong-un's half-brother, Kim Jong-nam, was assassinated at Kuala Lumpur airport in 2017. North Korea is believed to be behind Kim Jong's assassination. -nam.
Malaysia and North Korea both expelled the ambassadors from their respective countries, while the Malaysian Embassy in Pyongyang was closed following the incident.