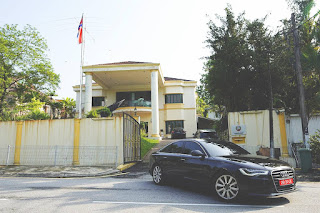 UMMATIMES - North Korean (North Korean) diplomats in Malaysia closed their embassies and prepared to return to their countries on Sunday (21/3). This action was carried out after North Korea broke off diplomatic relations over the extradition of a citizen to the United States.
The North Korean surprise move was made on Friday, calling Malaysia's extradition of a North Korean man last week an "unpardonable crime" committed under "blind obedience" to US pressure.
Malaysia is one of the few allies of North Korea, but the relationship between the two has begun to tense after the murder of leader Kim Jong Un's half brother at Kuala Lumpur airport in 2017.
The Malaysian court ruling said Mun Chol Myong could be extradited to the US to face money laundering charges for allegedly exporting prohibited goods to North Korea, in violation of the sanctions imposed.
After North Korea cut ties, Malaysia gave North Korean diplomats 48 hours to leave the country.
On Sunday (21/3), a North Korean flag and a plaque were taken down from the country's embassy, ​​while its gates were chained.
Before leaving, North Korea's attorney, Kim Yu Song, accused Malaysia of siding with the US in a "conspiracy" against North Korea, and of carrying out "acts of great hostility".
Malaysia has aligned its policies with US policies, "which seek to deprive our country of sovereignty, its existence and peaceful development," Kim, North Korea's most senior diplomat in Malaysia, told media.
Kim and a group of diplomats and their family members then left by boarding a bus. Then they arrived at Kuala Lumpur airport, loaded the pile of suitcases onto the trolley and went to check-in on the plane.
An airport security official, who did not give names, told about 30 North Koreans were expected to fly to Shanghai on Sunday evening local time.
North Korea's decision to cut ties comes after US Secretary of State Antony Blinken and Pentagon chief Lloyd Austin last week visited South Korea, part of an Asian safari to rally support against nuclear-armed North Korea and China.
Malaysia denounced North Korea's move as "hostile and unconstructive" and announced it would shut down its mission in North Korea, whose operations have been suspended since 2017.