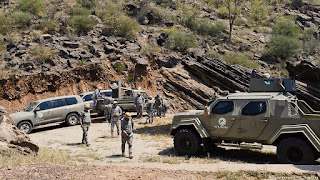 UMMATIMES - The shooting incident occurred in Saudi Arabia. The bullet projectile hit the oil terminal and started a fire.
Reported by AFP on Friday (26/3/2021), the shooting incident against an oil terminal occurred in southern Saudi Arabia. Local authorities said this was an attack.
"A projectile attacked a petroleum products distribution terminal in Jizan ... resulting in a fire in one of the terminal tanks," the ministerial authority said in Saudi, conveyed via the Saudi Press Agency.
The fire broke out because the bullet hit the oil tank. There were no fatalities as a result of this shooting incident.
The Saudi government said this was a cowardly attack. The Saudi government feels its vital objects are under attack.
"The (Saudi) spokesman stressed that the Kingdom strongly condemns the cowardly attack on vital installations," the Energy Ministry said, according to the Saudi Press Agency via Alarabiya.
"The attacks are not only targeting the Kingdom, but also oil exports, stability of energy supplies, freedom of world trade, as well as the global economy," said the Saudi Ministry of Energy.