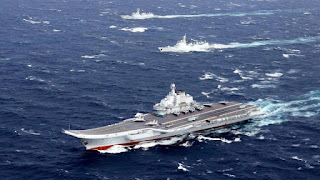 UMMATIMES -  The Philippines and Vietnam put pressure on China because hundreds of their ships entered the disputed area of ​​the South China Sea the other day.
Philippine President Rodrigo Doterte conveyed his concerns to the Chinese ambassador regarding Chinese vessels moored in the South China Sea.
"The president said we are very concerned. Every country will be concerned about the number of ships," Duterte's spokesman Harry Roque told a news conference.
Roque said at the press conference that Duterte reiterated to China's ambassador, Huang Xilian, that the Philippines won an important arbitration case in 2016. This will further clarify its sovereignty amid competing claims with China.
The ruling also invalidates China's 90 percent dotted line claim to the South China Sea.
Likewise, Vietnamese Foreign Ministry Spokesman Le Thi Thu Hang said Chinese ships on coral reefs violated its sovereignty.
"Vietnam asks China to stop this violation and respect Vietnam's sovereignty," Hang said at a regular press conference.
A Vietnamese coast guard vessel is seen moored near the disputed area, according to ship tracking data published by the Marine Traffic website Thursday.
Hang said Vietnam's coast guard "carries out its duties as governed by law", including international law.
The Philippines move has so far filed diplomatic protests over more than 200 ships believed to be moored on the Whitsun Reef in Manila's 200-mile Economic Exclusive Zone (EEZ).
The United States, Japan and Canada also expressed vigilance about the Chinese vessel.
The Chinese Embassy in Manila has so far not commented on this.
The South China Sea is still a conflict area until now, with many countries claiming territoriality in the region. Among them, Brunei, Malaysia, Taiwan, China Vietnam and the Philippines.
Previously, the Minister of Defense of the Philippines, Delfin Lorenzana, protested against China which was considered to have carried out an invasion because 200 of the country's ships were seen in the SCS dispute area.
Philippine coast guard had detected the ships on Whitsun Reef, about 320 kilometers from Palawan Island, since March 7.
"We urge China to stop this invasion and immediately withdraw ships that violate our maritime rights and encroach on our sovereign territory," said Delfin Lorenzana.
"This is a very clear act of provocation to militarize this area. This region is within the Exclusive Economic Zone (EEZ) of the Philippines."
Responding to the Philippine protests, the United States supported its diplomatic ally which is currently at odds with China.
The Chinese government stated that the reason 200 fishing boats were selling anchor in the Whitsun coral cluster in the South China Sea near the Philippines was due to bad weather.
Chinese Foreign Ministry spokesman Hua Chunying told a press conference in Beijing on Monday (22/3) that the Whitsun Coral Group is part of the Spratly Islands which is claimed to be the sovereign territory of the Chinese government.