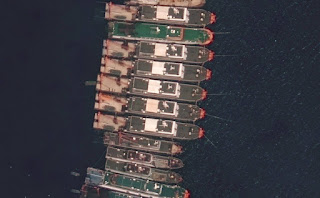 UMMATIMES - Philippine President Rodrigo Duterte vowed to protect his sovereign maritime area amid international concerns over the operation of Chinese vessels in the South China Sea. The spokesman for the President of the Philippines said the commitment was expressed by Duterte during a bilateral meeting with the Chinese Ambassador in Manila.
The Philippines has lodged a diplomatic protest over the presence of more than 200 ships believed to be manned by maritime militias, on the Whitsun Reef which is still part of the 200-mile exclusive economic zone under the Philippines' claim to sovereignty.
"The president said he was very concerned. Every country would be concerned about such a large number of ships," Duterte's spokesman, Harry Roque, told a press conference when asked about the meeting.
The United States (US), Japan and Canada have also expressed awareness of the large number of Chinese vessels in the disputed waters.

Strategic waters that are claimed by many countries

Roque said Duterte reiterated to China's Ambassador to the Philippines, Huang Xilian, that the Philippines had won a landmark arbitration case in 2016 that clarified its sovereign rights amid China's claims to the South China Sea.
The ruling also invalidates China's dotted line claim over 90% of the South China Sea, an international trade route that generates $ 3.4 trillion (IDR 49,110 trillion) annually. Brunei, Malaysia, the Philippines, Taiwan and Vietnam also have claims to these strategic waters.
The Chinese embassy in Manila did not immediately respond to a request for comment on the meeting.
The Chinese Embassy on Wednesday (24/03) claimed the ships on Whitsun Reef were fishing vessels. A Philippine military spokesman said the Chinese defense attaché denied any militias on board.

Manila deploys battleships to keep an eye on Chinese ships

The Philippine military deployed Navy ships to strengthen maritime patrols in the disputed waters on Thursday (25/03). "With the increasing presence of hundreds of ships in the area, we are committed to the Armed Forces of the Philippines (AFP) to protect the sovereignty of the country," said Philippine military spokesman Major General Edgard Arevalo.
Arevalo said military officials had met representatives from China on Wednesday (24/03) to discuss the situation in the South China Sea. The Philippine Defense Minister urged the Chinese ships to leave Whitsun Reef immediately.
Earlier, the Philippine coast guard said Chinese fishing vessels had been moored in the disputed area since early March.