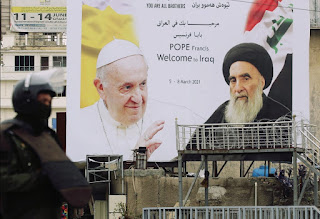 UMMATIMES - An Alitalia plane carrying Pope Francis, his entourage, security team and about 75 journalists, landed at Baghdad International Airport slightly ahead of schedule before 2pm local time. Several Iraqi religious authorities, governments and citizens welcomed Pope Francis' arrival in Baghdad on Friday during the Pope's historic first visit to Iraq.
The welcoming delegation included the Apostolic Nuncio to Iraq, Archbishop Mitja Leskovar, as well as representatives of the Chaldean Archeparchy in Baghdad, the Latin Archdiocese in Baghdad, the Syrian Archeparchy in Baghdad. The Armenian Archeparchy in Baghdad as well as the Prime Minister of Iraq, Mustafa Abdellatif Mshatat, the President of the Republic and his wife also welcomed the Pope. Pope Francis will spend four days in Iraq, during which he will travel north and south.
He will hold Mass at a Baghdad church, meet with Iraqi Shia Muslim clerics in the southern city of Najaf and travel north to Mosul, where soldiers had to vacate streets for security reasons last year because of the Iraqi prime minister's visit.Pope Francis' short tour will use planes, helicopters and possibly armored cars to four cities, including areas most foreign dignitaries cannot reach, let alone over a short period of time. As per protocol, the Pope's first official meeting takes place at the Presidential Palace. During the courtesy visit, he met privately with President Barham Ahmed Salih Qassim.
The pope will meet the pastor at a church in Baghdad, where ISIS militants killed more than 50 worshipers in 2010. Violence against Iraq's minority religious groups, especially when a third of the country is run by ISIS, has reduced the ancient Christian community to a fifth from 1. , 5 million people before.After the Pope's courtesy visit with the President of Iraq and his entourage, Pope Francis met with political, civil and religious authorities, the diplomatic corps, the business world and representatives of cultural institutions. Iraq deployed thousands of additional security personnel to protect the 84-year-old Pope during the visit, which comes after a spate of rocket attacks and suicide bombings raised fears for his safety.
Several Shiite militant groups have opposed Pope Francis' visit, calling it a Western interference in Iraqi affairs. The pope will also visit Ur, the birthplace of Prophet Abraham, who is revered by Christians, Muslims and Jews, and meet with Iraq's revered Shia Muslim cleric, Ayatollah Ali al-Sistani, who is 90 years old. The meeting with Sistani, who has enormous influence over Iraq's Shiite majority and in the country's politics, will be the first of its kind by a Pope.