Raam's Lunge, the Islamic Party that Shocks the Israeli Election 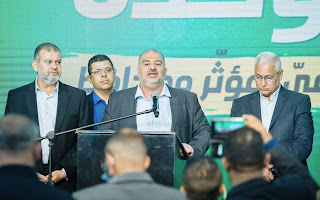 UMMATIMES - The conservative Islamic party, Raam, won the minimum votes to secure a seat in the Israeli parliament in the elections held on Tuesday (23/3).
The Raam Party is a group with roots in the same religious movement as Hamas, the ruler of the Gaza Strip.
According to the New York Times, for years, Raam seemed disinterested in Israel's leadership. Like most Arab parties, Raam was also often isolated.
However, a tally of 90 percent of the votes showed Raam won enough support to secure five seats in the 120-member Israeli Knesset.
This is considered to be able to balance the power between Prime Minister Benjamin Netanyahu's right-wing bloc and the religious party alliance that is trying to end his 12 years in power.
Raam is the political branch of the Islamic Movement, which in the 1990s split into a hardline branch in the north and a southern branch that was more moderate and willing to become involved in Israel's democratic process. Raam belongs to the southern branch.
Last year when Israel voted, Raam was part of a joint party list composed mostly of Arabs. But the alliance fractured earlier this year amid an ideological split between Raam leader Mansour Abbas and his former partners.
The conservative Abbas has long been at odds with other Arab Israeli factions, including those with communist roots.
Mansour Abbas is a conservative Muslim politician. Even so, he said he did not close the opportunity for his party to join Prime Minister Benjamin Netanyahu's government if he won again in the election.
A few weeks before yesterday's vote, Abbas showed openness to dealing with Netanyahu.
Abbas argues that Arab leaders have a responsibility to partner with whoever is in power to tackle the crime epidemic that is rocking Israel's Arab community.
In fact, all this time, other Arab community political parties in Israel hate Netanyahu's government because it often vilifies Arab-Israelis and the issue of conflict with Palestine.
Raam has previously stated that he will only support the government from outside. Don't want to be in ring one.
However, the possibility of Raam playing a decisive role in forming a coalition government is making waves in Israel.
For information, the independent Arab Party has never been part of Israel, although some Arab lawmakers supported Yitzhak Rabin's government from outside in the 1990s.
Reporting from France 24, in 2019, Raam's party was on the Joint List, an alliance of mostly left Arab parties that are united against Israel's right-wing anti-Arab policies such as the 'Nation-State Act', which promotes an exclusive identity. Israel as a Jewish state and denigrates Arab identity and rights.
The Combined List has set record-winning votes over the past two years. They won 13 seats in the September 2019 election and raised it to a record 15 seats in the April 2020 poll, making it the third-largest bloc in the Knesset's 120 seats.
The alliance has been praised for its role over the past two years in preventing Netanyahu from securing the majority needed to form a government.
This includes supporting Benny Gantz, leader of the centric Blue and White faction who is now defense minister. It was a tough choice for a Combined List.
Ayman Odeh, as the leader of the bloc, explained that this was an easier option, compared to the dangers of the Netanyahu government and continued discrimination against the Arab community in Israel.