Rabbi Pinchas Goldschmidt rejects the ban on the veil in Switzerland 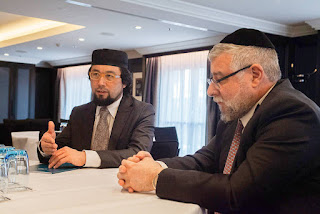 UMMATIMES - The Jewish and Muslim communities in Switzerland have joined forces to oppose the banning of the veil. They argued that this prohibition was an attack on religious freedom.
"Limiting and violating some conditions of religious freedom," said a joint statement by the Federation of Swiss Jewish Communities, the ban on wearing the veil could weaken a person's ability to practice his faith.
In a joint statement, the Swiss Jewish group said they were concerned if further legislative or federal proposals could further undermine religious freedom in the future.
"We fear this attack on religious freedom further weakens the ability to exercise one's faith, the basic freedoms and human rights that are fundamental to liberal democracy," Goldschmidt wrote.
In a separate statement Rabbi Pinchas Goldschmidt, president of the Conference of European Rabbis and a native of Zurich. "Switzerland has a long history of trying to curb migration through banning religious practices."