Saudi Arabia; For the sake of renewable energy, will plant 10 billion trees 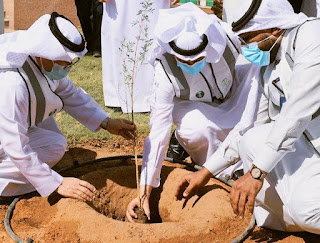 UMMATIMES - Saudi Arabia's Crown Prince Mohammed bin Salman (MBS) announced a government program to plant 10 billion trees. This program is taken to address climate change and reduce carbon emissions.
"I am proud to announce the Saudi and Middle East Green Initiative," said Mohammed bin Salman quoted from Middle East Eye, Monday, March 29, 2021.
MBS explained that 10 billion trees will be planted in Saudi Arabia in the coming decades. In addition, they are also working with regional neighbors to plant another 40 billion trees in the Middle East.
Riyadh claims that the total planting of 50 billion trees in the Middle East will be the largest reforestation program in the world. The total area to be planted with trees is equivalent to twice the size of the Great Green Wall planting project in the Sahel region of North Africa.
MBS said with this program Saudi Arabia would reduce carbon emissions by generating 50 percent of its energy from renewable sources by 2030.
The new green initiative is part of the kingdom's Vision 2030 strategy to move away from oil dependence and to modernize the kingdom.
Earlier this year, MBS unveiled "The Line", an ambitious plan to build a new, eco-friendly city in a straight 170 km line that will have no cars, roads or carbon emissions.
The plan was criticized on social media, with some describing it as "dreamy of a sci-fi film," while others highlighted that local tribes in northwest Saudi Arabia were being evicted to make way for a zero-carbon emission city.