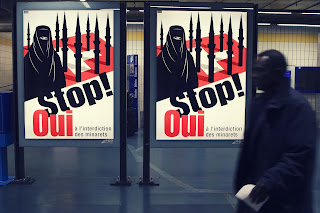 UMMATIMES - Switzerland decreed a ban on the use of the burqa in public places. The controversial proposal, put forward by several groups including the far-right Swiss People's Party, has the support of 51.21 percent of voters.
This means that the Burqa / Niqab will be banned in all publicly accessible places, including on the street, in public offices, on public transport, in restaurants, shops and in the countryside.
The anti-burqa vote comes after years of debate in Switzerland. Even though wearing a burqa is a very rare sight on Swiss roads.

Campaign poster on the road

Campaign posters have been plastered around Swiss cities, reading "Stop Radical Islam!" and "Stop extremism!", which features a woman in a black niqab or burqa.
A rival campaign poster reads: "No to the absurd, useless and Islamophobic 'anti-burqa' law".
There will be no exceptions for tourists too. Exceptions to the rules for wearing this burqa / niqab, such as in places of worship, or for reasons of health and safety.