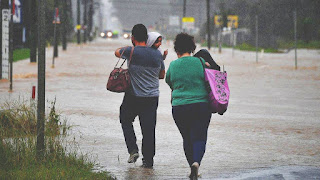 UMMATIMES - People in the northwestern region of Sydney, Australia, have been urged to evacuate because heavy rain is predicted to continue on the east coast of Australia on Sunday, March 21, 2021 local time. The rushing water caused widespread destruction throughout the area.
Flood risks and evacuation warnings apply to 12 areas in the state of New South Wales (NSW), which has a population of 8 million. Heavy rains have caused river water to overflow and pose another risk of danger.
"The damage was caused not only by rain, but also by strong winds," said Bureau of Meteorology meteorologist Jonathan How.
Heavy rain is expected to fall on Sunday, March 21, 2021 in the capital city of Sydney and other surrounding areas. Emergency services said they had received about 600 calls throughout Saturday night asking for help. More than 60 calls came in asking for help to be saved from the flood.
Footage broadcast on television and social media shows moving water rapidly inundating residents' homes, blocking roads, causing trees to fall and destroying road infrastructure.
This bad weather has also impacted the delivery of the corona virus vaccine to the City of Sydney and the rest of the state of New South Wales. The tragedy also disrupted Canberra's plans to deliver the first dose of the coronavirus vaccine to 6 million people over the next few weeks.
New South Wales Prime Minister Glayds Berejiklian said the moving weather in the region he leads could be the first such event in 25 years. It will be some deep extreme weather.