Temples in Bangladesh were attacked after Indian PM's visit 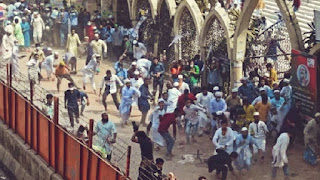 UMMATIMES - Hundreds of members of a hardline Islamist group attacked Hindu temples and a train in eastern Bangladesh on Sunday. The attack occurred after a visit by Indian Prime Minister Narendra Modi to the country.
At least 10 protesters were killed in clashes with police during a protest organized by Islamic groups against the Indian leader's visit. Meanwhile, violence continued to rage after Modi's departure.
It is known that Modi arrived in Dhaka on Friday (26/3) to commemorate 50 years of Bangladesh's independence. Modi returned home the following day, after giving Bangladesh Prime Minister Sheikh Hasina about 1.2 million shots of the COVID-19 vaccine.
Islamic groups accuse Modi of discriminating against Muslim minorities in India.
On Friday (26/3), dozens of people were injured in the capital Dhaka when police fired tear gas and rubber bullets at protesters. Thousands of Islamic activists lined the streets of Chittagong and Dhaka on Saturday in protest.
On Sunday (28/3), activists from the Hefazat-e-Islam group attacked a train in the eastern district of Brahmanbaria, leaving ten people injured.
"They attacked the train and damaged the engine room and almost all the carriages," a police official told Reuters on condition of anonymity.
Furthermore, a number of Hindu temples in the city were also attacked.
Islamic activists are suspected of also setting fire to two buses in the western district of Rajshahi.
In the Narayanganj area, hundreds of protesters clashed with police. Protesters used logs and sandbags to block roads. The police responded with rubber bullets and tear gas attacks, leaving dozens injured.
The protests sparked by Modi's visit have since flared into a wider demonstration against police killings. The Hefazat-e-Islam group imposed a national strike on Sunday (28/3).
"Police opened fire on our peaceful supporters," said Hefazat-e-Islam organizer secretary Azizul Haque at a rally in Chittagong on Saturday (27/3). "We will not let the blood of our brothers go to waste."