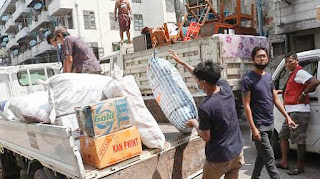 UMMATIMES - The Thai army has denied helping the Myanmar military by supplying rice for them. Anything that is sent across the borders of the two countries, they say, is part of normal trade.
"The Thai army does not supply the Myanmar army and there has been no contact from those who asked for help or asked for assistance from us because they have their own honor," said Naresuan Forces Commander Major General Amnat Srimak.
Amnat explained that his party could not block the movement of goods at the border between the two countries as long as it did not violate the law and followed customs procedures.
Previously, Thai media reported that the Thai army had supplied 700 sacks of rice to units of the Myanmar army on the eastern border. They quoted an unidentified security official as saying it was on the orders of the Thai government.
This media showed photos of what looked like bags of rice being loaded onto trucks at the border. Images seen by Reuters show men, some in camouflage uniforms, crossing into Thailand and checking their temperatures.
A Thai government spokesman did not immediately respond to a Reuters request for comment. The Myanmar military did not answer calls seeking comment.
as
Border trade between Thailand and Myanmar has been severely restricted since the outbreak of the coronavirus pandemic. Residents told Reuters reporters that the crossing shown in the pictures was not a normal trade route.