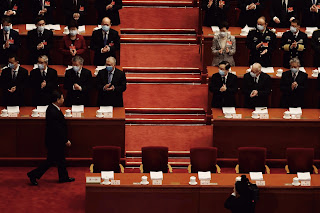 UMMATIMES - China continues to work with its plans to transform Hong Kong's electoral system. This year's Chinese National People's Congress (NPC) will discuss Hong Kong's electoral plan, to ensure government posts in Hong Kong are filled only by Beijing loyalists known as "Patriots",
"The Chinese parliament has the power to improve Hong Kong's electoral system. The Hong Kong electoral structure must fully implement the governing Patriot principle," said NPC Spokesman Zhang Yesui, on Friday, March 5, 2021.
"Only with the Patriot to lead Hong Kong will all the policies of the central government be properly implemented to safeguard the Basic Law, long-term stability and security of Hong Kong," said Zhang Yesui.
In the opening of the NPC, the Chinese Government stated that all changes would be for a good cause. Focused, they said, on safeguarding and counteracting outside influence on the sustainability of governance in Hong Kong. As for that, it is China's prerogative.
The Chinese government plans to implement the new system in Hong Kong's next legislative elections, so it is expected that they will postpone the election again until 2022.
There will be several changes that will go into the new design of Hong Kong's electoral system. One of these is the increase in the size of the Hong Kong election organizing committee from 1200 to 1500 people. And an increase in the quota of the Regional People's Representative Council from 70 to 90 seats.
The Chinese government also plans to form a new body that functions to select candidate candidates who will fill government posts in Hong Kong.
Currently, 50 percent of the seats in the Hong Kong Legislative Council are elected via the direct election system. Typically, pro-democracy politicians outperform Beijing loyalists. This is supported by the principle of universal suffrage, which enables citizens to determine for themselves who their representatives in the government are.
If Hong Kong's planned changes to the electoral system materialize, it will be a new blow to pro-democracy politicians and activists. They will not only have been suppressed by the Hong Kong National Security Act, but also potentially will not have the opportunity to fill government posts and make changes.
"However, what is happening in Hong Kong now is a setback, even closer to the opposite extreme, further away from the principle of universal suffrage," said Ivan Choy, a lecturer at the Department of Government and Public Administration at the Chinese University.