The conservative Islamic party, Raam, won a seat in the Israeli parliament 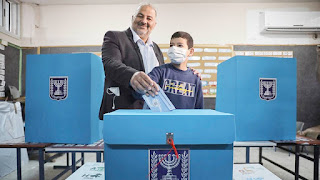 UMMATIMES - The conservative Islamic party, Raam, surprisingly won the minimum votes to secure a seat in the Israeli parliament in Tuesday's election.
A tally of 90 percent of the vote shows Raam won enough support to secure five seats in the 120-member Israeli Knesset.
The leader of Raam, Mansour Abbas, is a conservative Muslim politician. Even so, he said he did not close the opportunity for his party to join Prime Minister Benjamin Netanyahu's government if he won again in the election.
In fact, all this time, other Arab community political parties in Israel hate Netanyahu's government because it often vilifies Arab-Israelis and the issue of conflict with Palestine.
"We are ready to engage with Prime Minister Benjamin Netanyahu's camp or his competitors," Abbas told Israeli radio.
Abbas stressed that "I do not rely on any camp."
So far, Abbas and his party have often clashed with politicians and other Arab-Israeli parties, including those with communist views.
In last year's election, Raam joined the Arab Joint-List coalition. But the alliance fractured earlier this year amid an ideological split between Abbas and his former partners.
A few weeks before yesterday's vote, Abbas showed openness to dealing with Netanyahu.
Abbas argues that Arab leaders have a responsibility to partner with whoever is in power to tackle the crime epidemic that is rocking Israel's Arab community.
Election on Tuesday this week is the fourth time that Israel has held in two years.
The results of the exit polls released by Channel 12 and Channel 13 show a deadlock between the pro-Netanyahu bloc and the political bloc that wants to overthrow the PM.
Netanyahu's right-wing coalition consisting of his Likud, Shas, United Torah Judaism and far-right Zionist religious parties is predicted to win 52 of the 120 Knesset seats.
Meanwhile, the political bloc that wants to end Netanyahu's grip on power is predicted to win 56 Knesset seats.
In order to win a majority, Netanyahu and the coalition must secure a minimum of 61 votes. This figure makes Netanyahu need to collaborate with a number of parties that have the opportunity to join his coalition.
So far, analysts at the state broadcaster Khan predict Netanyahu should approach the seven-seat Naftali Bennet party as well as Raam.
Despite winning a majority, Netanyahu's coalition will still face challenges forming a government.