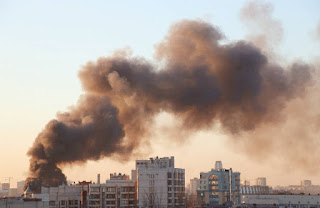 UMMATIMES - The death toll from the explosion that occurred on Sunday (7/3) at around 16.00 local time, in the Equatorial Guinea military barracks increased to 98 people. "We regret that 98 people were killed and 615 injured," wrote Guinea Vice President Teodoro Nguema Obiang Mangue on his Twitter account (9/3/2021).
Security guards worked together with residents to evacuate the bodies crushed by the rubble of the building. "Three young children were taken alive and taken to hospital," he said.
The President of Guinea, Teodoro Obiang Nguema, said the explosion was caused by 'negligence in handling the explosive device' at the military barracks located in the Mondong Nkuantoma area, Bata city.