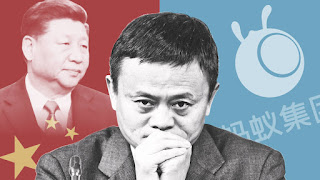 UMMATIMES - Jack Ma, Founder of Alibaba and Ant Group, lost his title as the richest man in China. This can be seen from the data published by the Hurun Global Rich List on Tuesday, March 2, 2021. According to the Hurun Global Rich List, Ma's position was shifted from the top three richest people in China due to restrictions on Ant Group and Alibaba regarding anti-trust issues.
Ma and his family in 2019 and 2020 were listed as the richest people in China. But now, he is in fourth position or after Zhong Shanshan, a water bottle maker entrepreneur and Collin Huang, an e-commerce entrepreneur.
Ma's misfortune was sparked by his own speech on 23 October 2020 that blamed China's regulatory system. His speech led to his company Ant Group experiencing a USD 37 billion IPO suspension just days before the fintech company entered the public list.
Since then, authorities in China have tightened anti-trust controls on the technology sector in the Bamboo Curtain country, where Alibaba is also an easy target. Market regulators launched an anti-trust demonstration effort on Alibaba last December 2020.
Chinese regulators also began to closely monitor the fintech sector and asked Ant Group to reduce some of its businesses to a money finance holding company, which is regulated like traditional financial companies.