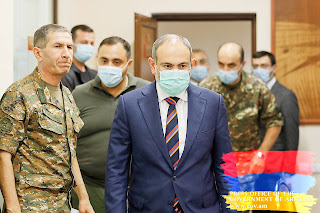 UMMATIMES - Military commander General Onik Gasparyan has been fired for allegedly attempting a coup. "Onik Gasparyan will be officially removed from office starting March 10," said a government statement.
Military commander General Onik Gasparyan previously demanded Armenian Prime Minister Nikol Pashinyan leave power last month.
This move led Pashinyan to fire him. However, the dismissal failed because he did not get the president's approval twice. The Pashinyan government says the dismissal is now legally effective because the president does not sign the decision even though it is past the statutory deadline.
The Armenian President Sarkissian's response on Wednesday filed an appeal to the constitutional court to review the legality of Gasparyan's dismissal, the president's office said in a statement.
Pashinyan has faced calls to resign since last November when he agreed to a ceasefire with Azerbaijan over the Nagorno-Karabakh region conflict.