The Results of Hot Discussions America and China in Alaska 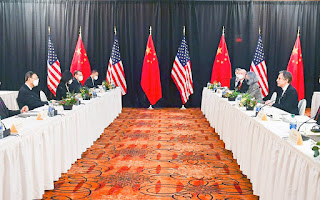 UMMATIMES - America and China finally concluded their bilateral meeting in Alaska which lasted from Thursday to Friday.
Starting off heatedly with the US calling China a threat to global stability, the meeting reportedly took place tough. Even so, the Americans insisted that they had conveyed everything they needed to convey to China.
"From the start we wanted to convey whatever we were worried about Chinese action. This is a concern shared by our allies ... We also reaffirm America's policies, priorities and perspectives ... The defensive response we got," said Blinken.
Blinken did not explain what kind of defensive response the Americans got from China. When referring to China's response at the opening of the meeting, China accuses America of being the party that is actually looking for trouble and problems on various issues ranging from democracy, race to human rights.
Like Blinken, the Chinese Communist Party's senior diplomat, Yang Jiechi, did not explain in detail how the meeting went and what the outcome would be like. At the end of the meeting, he said that dialogue is the only way to resolve differences with America, but China will not change its attitude so easily on certain issues.
As previously reported, America and China are often at odds on various issues. One of them is the matter of the Indo-Pacific, which part of the waters of China claims to be its own. In addition, the two of them also conflict over the status of Taiwan's sovereignty and democracy in Hong Kong.
At the beginning of the meeting, America accused China of carrying out coercive practices on these issues. Regarding the Indo-Pacific, for example, China has issued a policy that allows its coast guard vessels to attack any ship that enters the territory they claim. According to America, if China is left unchecked, global stability can be disrupted.
"We (only) maintain national sovereignty, security, and interests to develop China. That is something we cannot stop. We hope America does not underestimate our steadfastness in protecting our territory and interests," Yang Jiechi said.
One of the senior American officials, who took part in the meeting concerned, said the meeting took place without concrete results. Even so, he said, America and China discussed many strategic issues and tried to find common ground.
"We think there are a number of areas where, under normal circumstances, could be explored together to find out whether there is a possibility of cooperation or not," said the official, who declined to be named.
The official continued, some of these areas include North Korea, Iran, Afghanistan and Climate Change. Although discussions in related areas did not result in concrete decisions, he said that the US Government received a variety of new information that would be useful in the future.