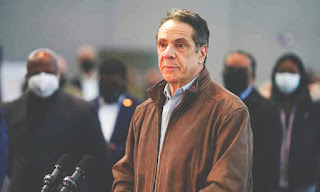 UMMATIMES - On Friday, March 12, 2021, New York Governor Andrew Cuomo was urged to resign by two senate members from New York who joined another senate, led by politicians from the Democratic Party.
The call came after a seventh woman appeared to testify accusing Cuomo of sexual harassment.
Chuck Schumer, the senate majority leader and Kirsten Gillibrand joined US lawmaker Alexandria Ocasio-Cortez in calling on Cuomo to step down as governor of New York.
Cuomo has repeatedly denied the accusations directed at him. On Friday, March 12, 2021, he said it was reckless and dangerous for politicians to ask him to resign before they had the facts.
“Women have the right to voice opinions and be heard and I fully encourage that. But I also want to be clear, the truth is still questionable. I didn't do what I was accused of. Point, "said Cuomo.