The Uyghur Genocide in Xinjiang: The Biggest Lie of the Century 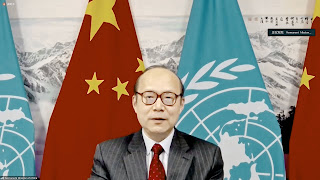 UMMATIMES - The Chinese delegation attending the meeting with the United States in Alaska, USA confirmed that claims regarding genocide against Uighur Muslims in Xinjiang, China are the biggest lies of this century.
This was conveyed on Friday (19/3) after the end of the China-US high-level strategic dialogue in Anchorage, Alaska state.
The Chinese delegation said it was ready to engage in exchange visits with the US side out of mutual respect, and that Xinjiang's doors were wide open to the world.
However, the delegation stressed that China would not accept any investigation into Xinjiang based on the guilt of those who are biased and condescending, and who wish to lecture China.
The Chinese delegation said the US side was expected to respect the facts, stop attacks on Chinese policies and denigrate Chinese policies in Xinjiang, and leave a double standard on anti-terrorism.
The two-day dialogue in Alaska marks the first high-level contact between the two countries after their heads of state placed a phone call on Lunar New Year's Eve. The dialogue is the first face-to-face talks between high-level officials on the two sides since US President Joe Biden took office in January.
During the meeting in Alaska, US Secretary of State Antony Blinken met with his Chinese counterpart, Yang Jiech. From the start of the meeting, the two parties immediately exchanged sharp reprimands against each other.
Blinken said the Biden administration would express "deep concern" about some of Beijing's actions at home and abroad, including its treatment of Uighur Muslims in Xinjiang.
"Each of these actions threatens the rules-based order that maintains global stability," said Blinken.
Yang later replied to that statement, telling the US to abandon the "Cold War mentality" in its approach to China.
He added that the US "is abusing its so-called national security notion to obstruct normal trade exchanges, and inciting some countries to attack China."
Yang said that "China is firmly against US interference in China's domestic affairs."