The Venezuelan president; Maduro was injected with the Sputnik V vaccine 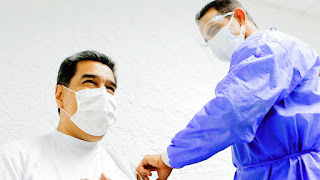 UMMATIMES - The first dose of the Russian Sputnik V corona virus vaccine has been injected into the President of Venezuela, Nicolas Maduro and first lady Cilia Flores. Maduro said he felt 'fine' after receiving the injection.
"Around the world, research says that the Russian vaccine is a great vaccine to generate immunity," "We will guarantee all vaccines for the Venezuelan people," Maduro said.
Venezuela has received its first 100,000 doses of the Sputnik V vaccine on February 13. Maduro said the authorities had given about 60 percent of the dose to medical personnel as well as officials and lawmakers in the first phase.
The second batch of 100,000 doses of Sputnik V arrived from Moscow via flights operated by state airline Conviasa. Said the Venezuelan Ministry of Health.
Venezuela has reported 141,356 cases of the new coronavirus and 1,371 deaths, well below the levels of its South American counterparts. Many opposition politicians and medical personnel have questioned the statistics, saying the true number is likely much higher due to a lack of testing.