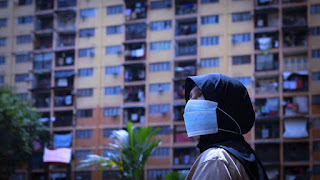 UMMATIMES - Tens of thousands of families in Malaysia are now experiencing an emergency shortage of domestic helpers (PRT), especially when residents are working from home during the Corona pandemic (COVID-19). This was stated by the Malaysian National Human Resources Association (Pusma).
As reported by The Star, Thursday (25/3/2021), the President of Pusma, Zarina Ismail, said that more than 10 thousand families in Malaysia are suffering because they have not received domestic workers.
"What adds to their misery is that many foreign domestic workers terminate their employment contracts immediately and return to their countries," Zarina said in a press conference on Thursday (25/3) local time.
Zarina said that many families are struggling to cope with a shortage of domestic workers and the situation is difficult for those who are elderly and live alone, or need special assistance.
Working mothers are particularly affected by the shortage of domestic workers, as they have to work from home while taking care of their young children, or parents who are elderly or have disabilities.
"Some children attend school two or three times a week, with others staying at home," said Zarina. "Many parents struggle to work from home while taking care of their children and households," he added.
Regarding the risk of the spread of Corona due to the entry of foreign domestic workers into Malaysia, Zarina said this was insignificant being ignored. He quoted statistical data submitted by the Senior Minister of Malaysia, Ismail Sabri Yaakob, who stated that only 0.42 percent of the 117,449 foreign nationals who entered Malaysia tested positive for Corona between 24 July 2020 and 5 February 2021.
"This means there is only one positive case out of 238 arrivals, which is classified as insignificant," said Zarina.
Zarina added that employers are willing to bear the cost of the Corona test and mandatory quarantine for domestic workers brought into Malaysia, amounting to 3,900 Ringgit (Rp. 13.6 million). Zarina said that her representatives had met Ismail Sabri and Minister of Human Resources M Saravanan to highlight this issue.
"We have written a letter to the Prime Minister as well and hope to meet with him soon to discuss this issue as the situation has reached a critical point," he added.
Meanwhile, David Tan, a representative from a coalition of 1,018 domestic workers agencies in Malaysia, suggested that the government could impose existing standard operating procedures for the entry of foreign workers on foreign domestic workers.
"Unlike foreign workers who work in other sectors, domestic workers come individually and do not live in groups," he said. "They present less health risks," adds David.
He added that if the current situation continues, there is a danger of an entry of foreign workers without valid documents who are hired as domestic workers. That situation, according to David, will pose a greater health risk to employers and even society.
Since last March, the entry of foreign domestic workers into Malaysia has stopped when borders are closed to control the spread of Corona.